The transparency gained through visual scheduling was key to achieving operational agility.

The Spanish company Adix has more than 20 years of experience in producing a wide range of industrial explosion protection systems with a focus on the power industry, mainly in the areas of food, chemistry, and pharmacy. Moreover, they offer consulting, training, and maintenance.

After having introduced Microsoft Dynamics as ERP in the company and having worked with it for some time, it became clear relatively quickly that an additional scheduling tool was needed to better manage the production processes.

Tecon, which is Adix’ Microsoft Dynamics partner, thus recommended NETRONIC as a provider of visual scheduling extensions for Dynamics 365 Business Central. Adix looked at the options provided by NETRONIC and decided for the Visual Advanced Production Scheduler (VAPS).

Working with an advanced production scheduling software led to

Hear what Ignacio Garrido Ceca, Managing Director at Adix, has to say about the VAPS:

The situation before NETRONIC

The wide range of components to produce and the fact that customers often need them at quite short notice poses major challenges for production planning at Adix. According to Ignacio Garrido Ceca, the planning of production processes often led to “a lot of frustration”, for both customers and the company, especially concerning the inaccurateness of delivery time commitments. “We had nearly no on-time deliveries”, reports Ignacio.

The hand-made approach brought a lack of control

In the beginning, the company used Excel sheets for their production planning and when this didn’t work, they tried to integrate macro-based Excel sheets with their company ERP. But no matter which approaches – a certain degree of chaos remained. As Ignacio Garrido Ceca recalls: “We were not really controlling our purchases nor our production.”

“And we were almost never on time” - Ignacio’s statement sums up the problems that arose from planning the production in a hand-made, and not digitized way. As the company was growing and with this, the number of orders was of course increasing, the inadequateness of their approach became clearer and clearer. This was even more frustrating, as the company has good products on offer and was running the risk of losing business because they had “… a lot of unsatisfied customers because of delivery problems”.

The production process was identified as being the cause of the problems and the Adix team realized that it was high time for a new ERP system. So, they decided for Microsoft Dynamics 365 Business Central. But after having used the ERP for some time, it became clear that this step was right, but was not yet enough. Adix still “needed a powerful, but easy-to-understand scheduling tool.”

Requirements for the production scheduling software

The production scheduling software should be able to

Tecon, Adix’s ERP vendor, and NETRONIC have been partnering for a long while, and “that's how we came to NETRONIC because the partner we use for our ERP is also a distributor of NETRONIC.” After some thorough investigating “…we decided to install NETRONIC software for scheduling”, as Ignacio states.

Usage of the NETRONIC VAPS

Having used the VAPS for a little more than a year now, Ignacio can report significant changes and improvements. 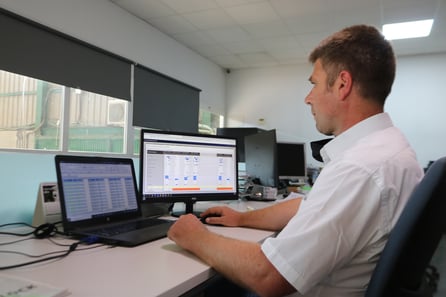 Advantages of the VAPS

“were changing the priorities every day. And then you are wasting a lot of time and you are using more time than expected for the production of every component or every equipment”, says Ignacio. "With the clarity the VAPS brings to the planning process, the employees now have a clear schedule and with this gain continuity and stability for their work." As Ignacio sums up “…it's easier for them and they are more relaxed."

Ignacio is pleased with the good cooperation:

“The VAPS fundamentally changed the way we manage and run our production. On the one hand, it gives us transparency and the right tools to achieve stable and seamless production processes. On the other hand, it allows us to react to unplanned incidents quickly and to make the right decisions fast. However, it is not just the product. It is also the people: Any time we asked, NETRONIC found solutions. It is very easy to communicate with the team, they are responsive, they listen to our needs and come back with ideas how to help us solve our challenges."

Learn more about the product which brought
addix success in scheduling

Summary: Transparency, gained by Visual Production Scheduler, improves interdepartmental planning and coordination of processes and helps to deliver on time.

Summary: Despite increasing production and variety of products, the Russian polymer packaging company can now safely meet its delivery deadlines.

Summary: A small individual enhancement of the Visual Production Scheduler has a great impact on the Swiss food supplements manufacturer's machine utilization.